We had snow! Like, enough snow to actually build a snowman - that rarely happens here in the UK. And I love it! (but only if I can sit in my PJ's and haven't got to venture out in it of course, haha!)

I saw a post on Facebook recently about snow dyeing, and it looked rather fun. So with an abundance of the fluffy white stuff at my disposal I decided to give it a go.

The night before the dye day I pre-soaked 4 skeins of yarn in citric acid solution and on the Saturday morning, I laid the yarn out into the trays as below.

For trays 2 and 3 the yarn was placed into colanders over a pan, so that the dye would drip through and not sit on the bottom of the tray and soak through underneath. 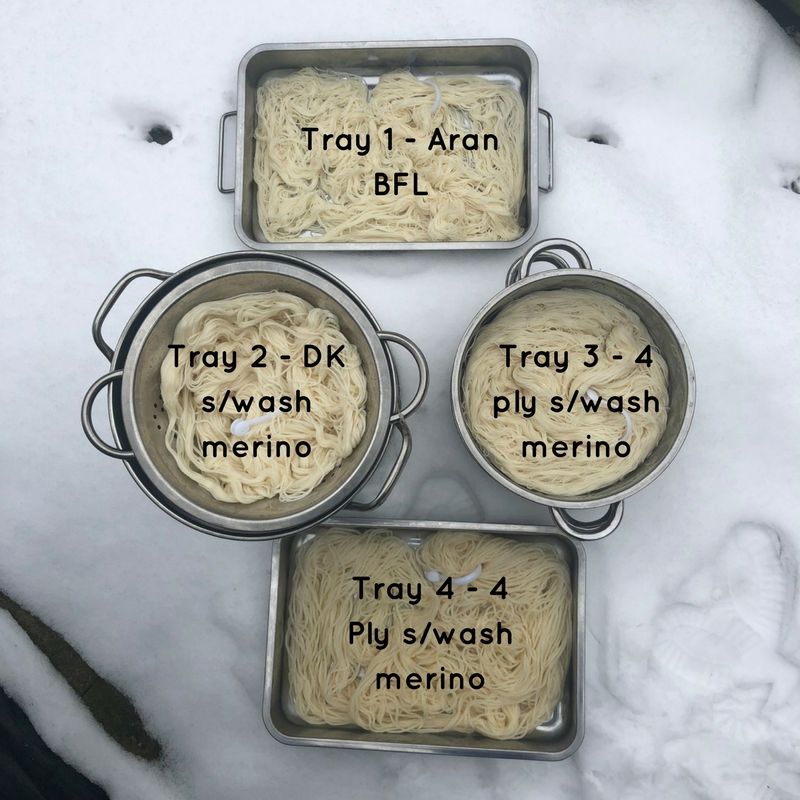 Then I covered the whole lot in lovely white snow. 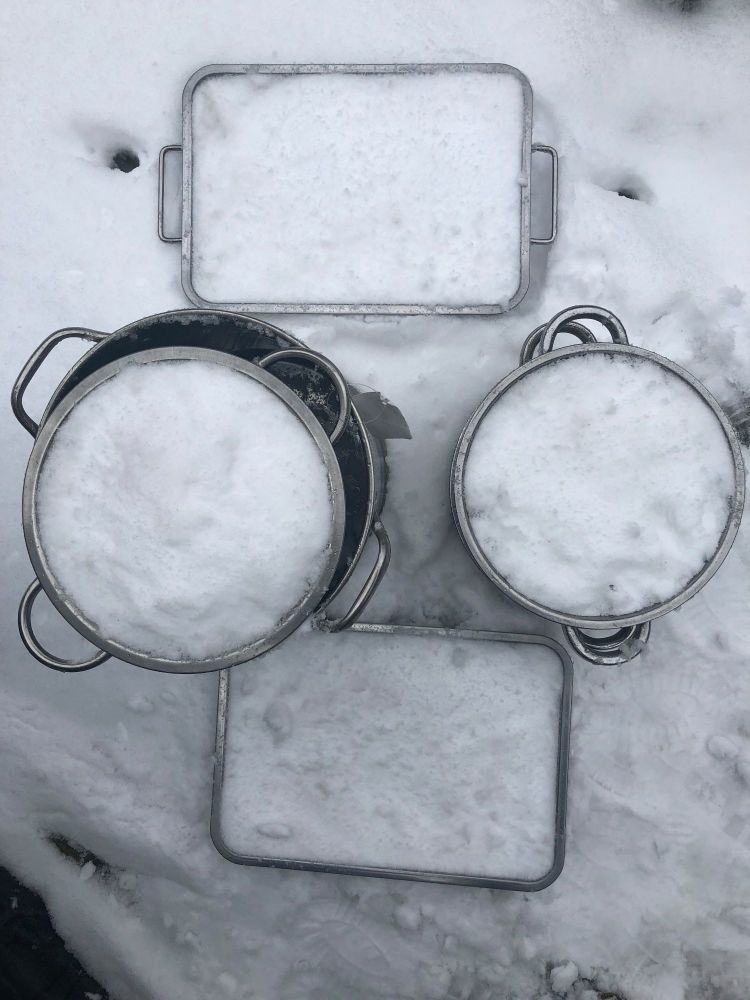 Now for the fun part! I used Landscape Dyes and sprinkled the dyes directly onto the snow by pouring a bit into the lid and tapping it over the trays. 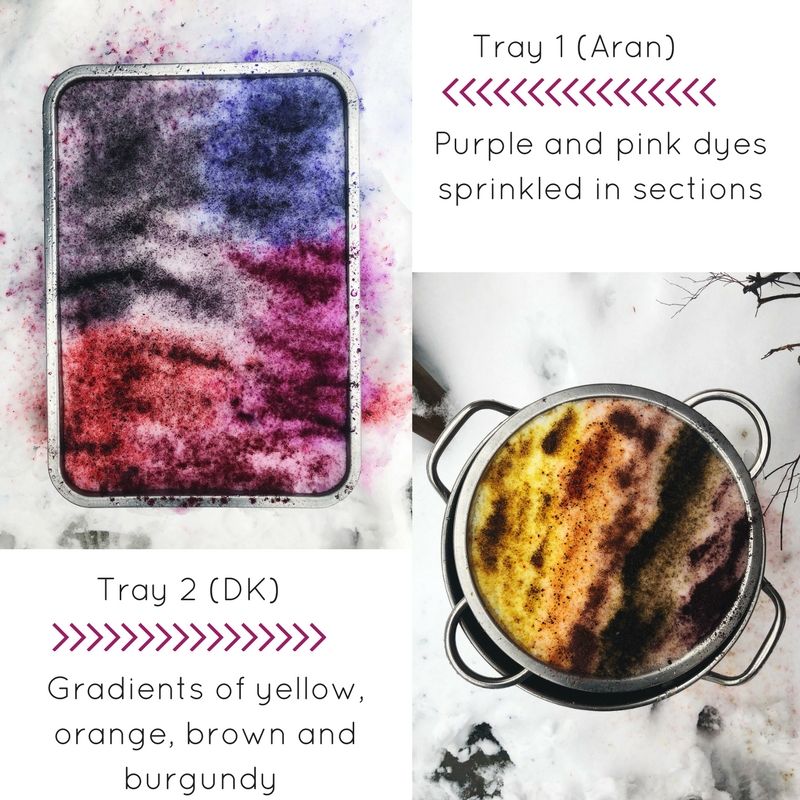 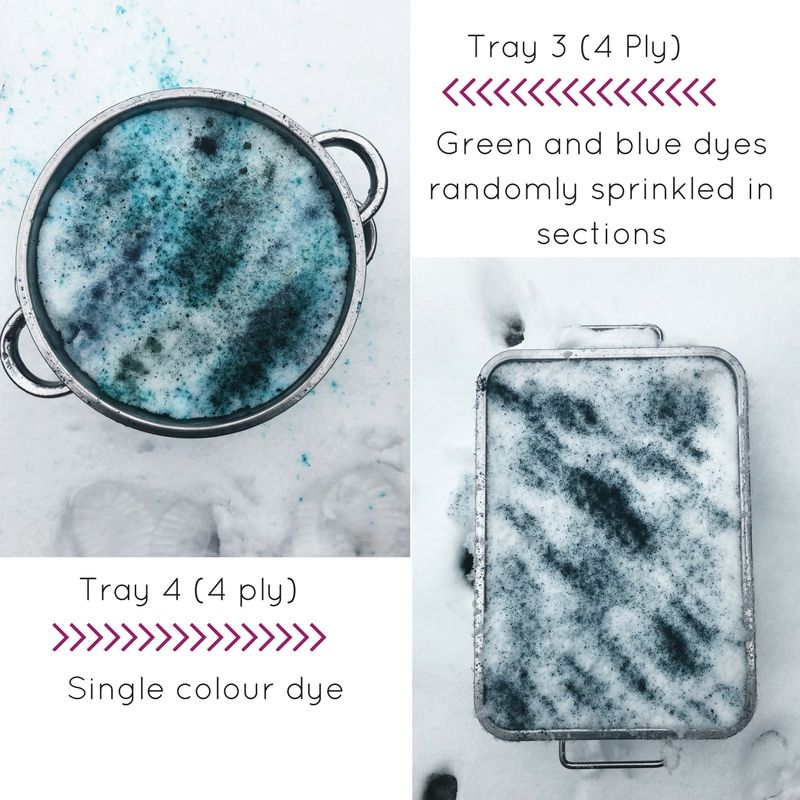 Then I brought the trays into the nice warm kitchen and the waiting game began. I mean I waited, and waited...it was a very slow process and I had to really resist the urge to go and get the hairdryer or pop them on the tabletop stove.

Eventually things did start to slowly thaw and I could see bits of yarn poking through. 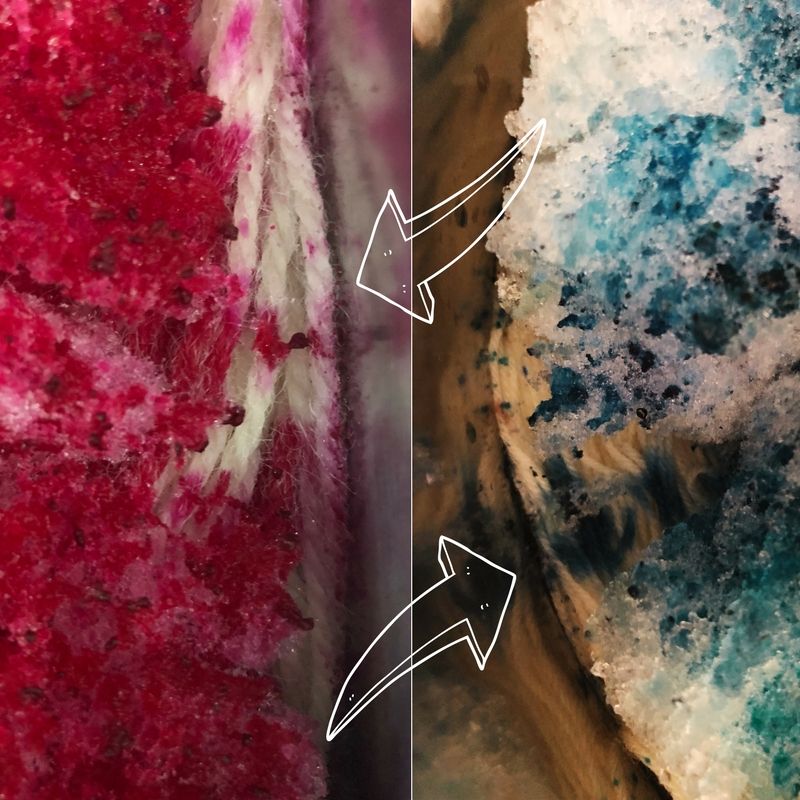 I did apply some heat to the 2 flat trays at the end as there was quite a bit of dye sat in the water and I wanted to exhaust some of that if I could. 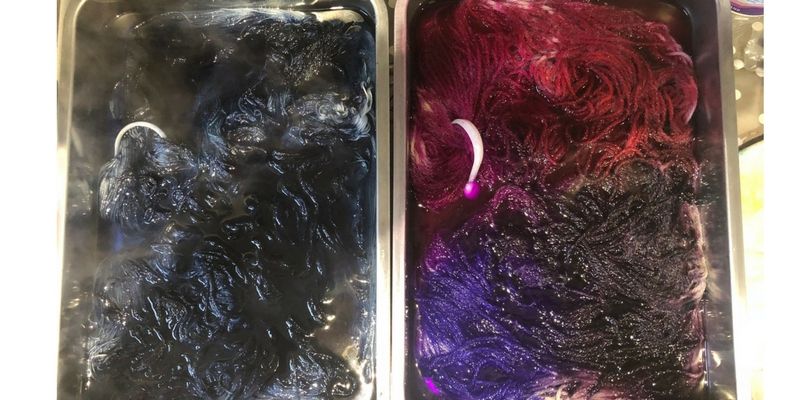 From here I let the yarns hang on the line for a while to train off any excess water, and then I wrapped them in cling flim and popped them into the steamer for 40 mins to set the dyes. This is how they looked pre-steam. 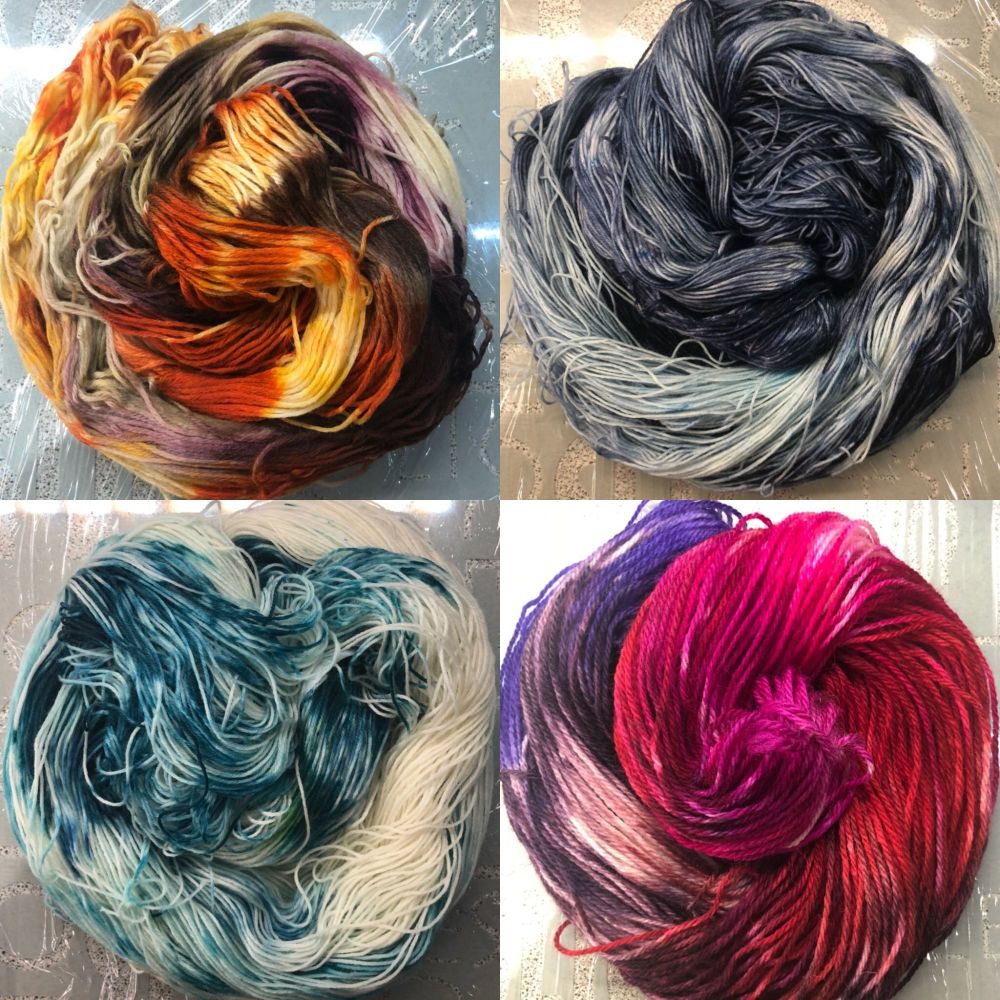 And these are the finished results! 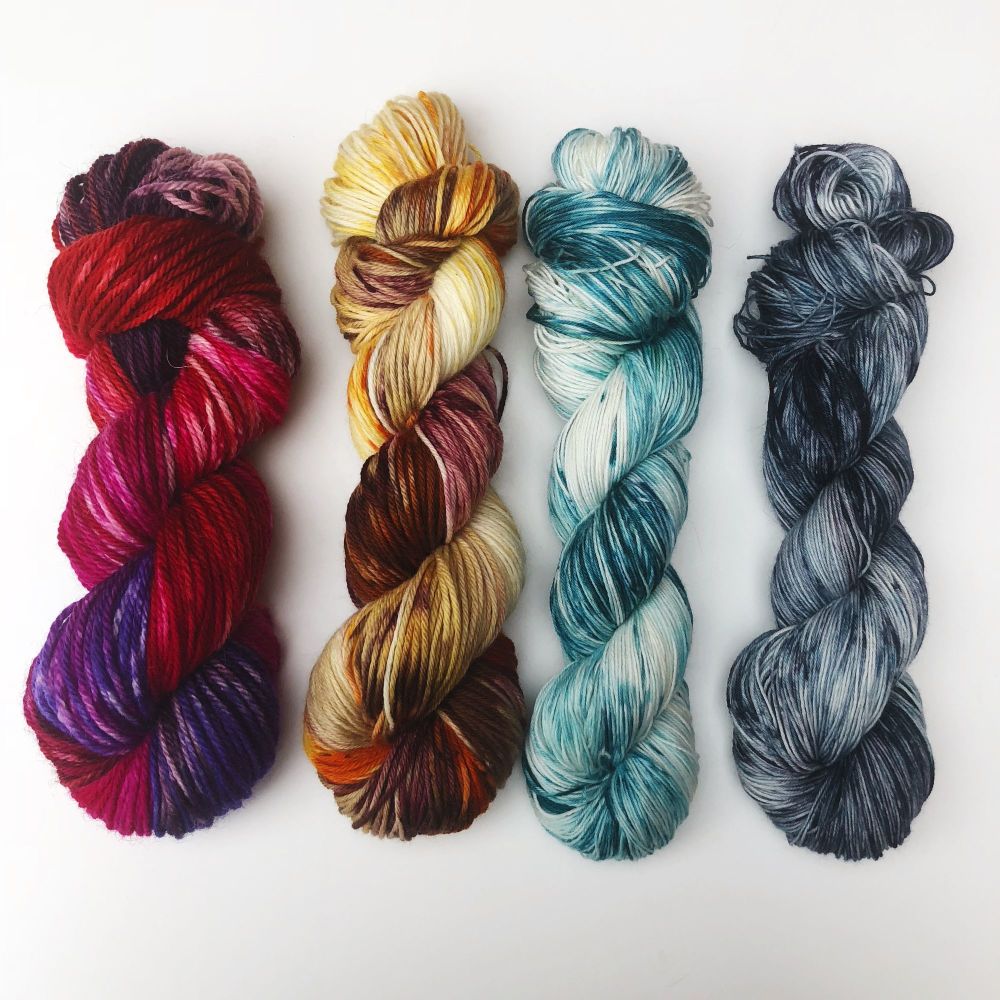 I think my favourite one is the far right. This was the single colour dye in Landscape Dyes Mountain Blue on the 4 ply merino. The mix is made up of different dye pigments which have seperated on the snow - so there are many tones of blue and even teeny tiny speckles of pink! 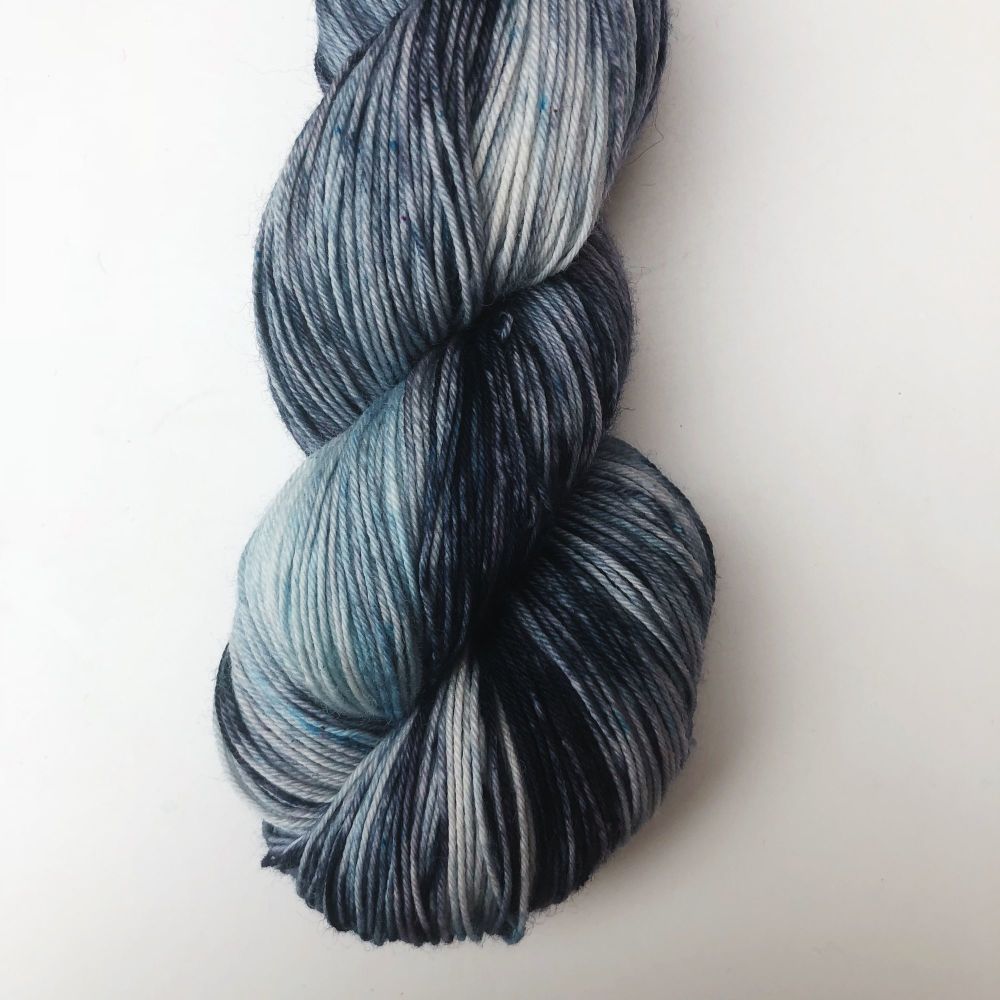 It was great fun experimenting wit this technique - even though some of the colours and combinations came out much different to what I was expecting. But that's the fun of trying these things out!

Things I learnt from Snow Dyeing

I think I am the only one in the UK sad that the snow is rapidly melting now - I'll definitely be trying this again next time!